Why “Show, Don’t Tell” Is All Wrong

If you’ve been writing for more than five minutes, you’ve heard this old saw: Show, don’t tell. There is value in this message—whether you’re writing a short story, novel or memoir. But I think the takeaway gets overpowered by the mantra. Let’s dig into what it really means and why this “rule” was never really meant to be a rule. First, we’ll take a step back and review a few basics.

What is a scene?

A scene is a story within your story. Good scenes have three things going for them. 1) They should have their own energy. 2) They should have a beginning, middle, and end. 3) They should be dynamic. A shorter way to say this is that scenes should have a purpose. Depending on the genre, the purpose can be to develop the characters or move the story forward. But even more than that, good scenes provide the reader with an a-ha moment, contextualize a deeper understanding of the story problem, or reveal a secret. 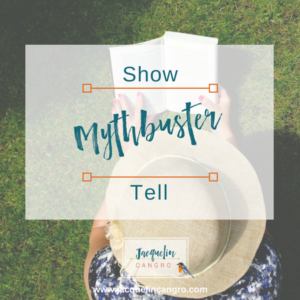 What is show, don’t tell?

I’ll often make these notes on a manuscript I am editing, “Create a scene around this point.” Or, “Let the reader experience this moment with the characters.” What I’m really saying is, show, don’t tell. In other words, apply the details in the section above to write a scene that uses action, dialogue, and interaction between characters and their environment to place the reader in the real-time forward motion of the story.

Let’s say that your characters (brother and sister teens) are in an argument. Two days ago, Jane revealed a secret to their parents. Over dinner, she told them that John is gay. Readers want to experience this moment along with the characters. We want a scene that puts us in the middle of that moment as Jane betrays her brother’s trust. The fallout of Jane’s indiscretion will be felt throughout the rest of the story. We don’t want to be told in hindsight how this played out through the argument they are having now.

Another very common reason I suggest show, don’t tell is around a character’s feelings. This has more to do on a sentence level rather than a scene level, but I’ll touch on it here because it contributes to the overall impact of the scene. Of course, John is furious that Jane told his secret to their parents. What does being furious look like for John? Did he punch the wall? Throw a plate? Slap Jane? Destroy her favorite sweater? Show the reader his anger through his action and dialogue rather than telling us he is angry. It is much more powerful for the reader!

But stories also need telling, and here is where show, don’t tell confuses writers. Telling is an essential part of your story. It is explanation, contemplation, and sometimes backstory. It offers quick information. It provides moments of respite between the action. In fact, instead of show, don’t tell, I prefer using the term scene and summary because it better describes what is happening in your story. While allowing the reader to experience a story moment through a scene is usually the better choice, here are some situations where summary, i.e. telling can be preferable:

Of course there may be exceptions when you would want to show these kinds of moments in scene, but ask yourself if it meets the criteria of a good scene.

Do you have any questions about when to show and when to tell? Ask away in the comments!

** Need some support to stay on track with your story this summer? My 1:1 writing coaching will help keep you engaged and moving forward. I’ve put together a special summer program. Come Labor Day, you’ll make a smooth transition back into your regular routine. More information can be found here.