My Problem With Writing Prompts

If you’re seeking a bit of inspiration, a fresh perspective, or an end to writer’s block, no doubt you’ve come across sites offering writing prompts.You can scroll through pages of imaginary scenarios and character questionnaires. Before you know it, you’ll awaken your muse, generate ideas, and maybe, eventually, build out a full-fledged story.

Problem is, these vague, random prompts rarely work as intended. I’ve had writers tell me that at first they felt rejuvenated, words flowed across the page. But at some point, once the enthusiasm waned, they struggled. One writer described it as air being let out of a tire. She ended up more frustrated and hesitant than before.

Down with generic writing prompts!

These prompts aren’t effective because they’re not connected to you or your interests in any way. Prompts that start with something like, Imagine you have to choose a secret door… what’s behind it? may get you a few pages, maybe a dozen or so. Then the moment you hit a rough patch (and we all hit rough patches), the idea loses its shine. You can’t get back to the initial burst of excitement because the idea doesn’t relate to anything you care about.

The best prompts foster curiosity, connection, and conscious attention. These writing prompts, I call them explorations, are grounded in your world, based on what you notice, what you find interesting and exciting enough to record. These explorations may be the genesis for a new story or aid in character development. Or you may find them showing up in scenes, lending more vibrant details that make your prose feel authentic.

And good explorations aren’t one and done. They can be used over and over as part of your regular writing routine. Because there is always something new to discover in your world.

So let’s start there, Agreed? 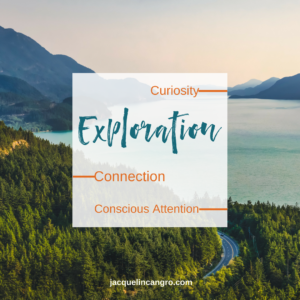 A snippet of conversation can be the inspiration for an entire story.  Author Warren Adler wrote the novel The War of the Roses based on a conversation he overheard at a dinner party. One of the guests said he had to hurry home otherwise his wife would lock him out of the house. When asked why, the man said he was getting a divorce but still living under the same roof as his soon-to-be ex-wife. Part of the agreement was a strict set of rules about comings and goings.

This exploration can be done anywhere—at a dinner party like Warren Adler, in line at the grocery store, or on public transportation—wherever you can be in proximity to people having a conversation will work.

You may not get the entire conversation. That’s okay. Listen to what people are saying and the way in which they say it. Notice if the speaker gets cut off mid-sentence. Also notice if there is strained silence. (Often what is not being said is just as interesting as what is being said.) Pay attention to the inflections in their voices. Is someone ending each sentence on a high note as if it is a question? Is someone sighing or clearing her throat? Does someone repeat every third word?

Write the highlights of the conversation in a notebook, including any verbal cues such as the ones mentioned above. This isn’t a journalistic exercise. It’s not important to get every word down verbatim. You’re looking for the general content and tone of the conversation.

Let me know if you tried this exploration and how it worked for you.

Need some support to stay on track with your story this summer? My 1:1 writing coaching will help keep you engaged and moving forward. I’ve put together a special summer program from mid-June to mid-August. Come Labor Day, you’ll make a smooth transition back into your regular routine. More information can be found here.