Nail the Ending: Dos and Don’ts for a Great Conclusion to Your Novel, Part 2

How do you wrap up a 300-page novel or memoir? It can be a daunting task. In the first part of this series, we reviewed the six styles of conclusions. These apply whether you’re writing a novel, memoir or short story. No matter which option you choose, the ending really only needs to do one thing: satisfy the reader. No pressure!

Here are some dos and don’ts to make your story dynamic and effective right to the very last word. 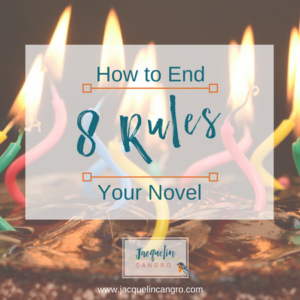 *DON’T introduce new characters or subplots near the end. Adding a new character or plot point at the last minute can feel like a crutch. The reader loses confidence because the author is not in control of the storytelling.

It smacks of deus ex machina. This is a plot device whereby a seemingly inextricable problem is suddenly solved with the intervention of a new character, ability or object. It can happen anywhere in the story, but most often rears its ugly head at the end.

*DON’T summarize, explain or philosophize. We writers often want to tell the reader what she should take from the story—the lesson learned or the conviction gained. The reader should be able to come to these conclusions on her own. Let the characters’ actions and the consequences of those actions speak for themselves.

Late monologues often indicate that certain information should have been introduced earlier but wasn’t — and now your character is trying to catch the reader up on that omitted information in one big breath. These soliloquies suggest a hole in the plot that the character is now trying to plug. Be aware of these info dumps and plug the hole earlier in the story.

*DO let your protagonist be the hero (or anti-hero). Good endings usually stem from the protagonist’s actions. If the main character’s third cousin shoots the bad guy in the end, it’s not as satisfying as letting the main character be the hero of the story. To that point, give your protagonist the opportunity to accept or correct her mistakes, no matter how many she’s made along the way. Allow the reader—and the character—to come to terms with them.

*DO tie up loose ends. Every question and sub-plot should be addressed, even if the final resolution will not come until the sequel. Go back through the story and mark those moments with subplot and supporting cast that seem to demand revisiting later and make sure you concluded them in a way that was satisfying to the reader.

*DO provide a mirror.  I find that my favorite endings have an echo or resonance that recalls the beginning of the story. When you reach the ending, try to bring some element that reflects the beginning. It reminds the reader how far we’ve come and ties those elements together.

*DO have your main character change. We want to know that the characters or their situations are different than when we started—otherwise what was the point? (Note that different doesn’t necessarily mean better.)

*But DON’T change tone. The tone of the ending should be consistent. For example, a tongue-in-cheek ending doesn’t befit a John Le Carre novel.

*DON’T be gimmicky. Use quirky twists and trick endings at your own risk. Your reader may feel cheated or disappointed. She’s invested in your story and characters for a few hundred pages. Don’t let her down.

Have you struggled to write a story ending? How did you write a satisfying conclusion?

Need some support to stay on track with your story this summer? My 1:1 writing coaching will help keep you engaged and moving forward. I’ve put together a special summer program from mid-June to mid-August. Come Labor Day, you’ll make a smooth transition back into your regular routine. More information can be found here.