Nail the Ending: Write a Great Conclusion to Your Novel, Part One

Deciding the best way to end a story is, for me, like filing my taxes. I know I need to do it, but I put it off and put it off until I just slap something together in a mad dash at the last minute. I don’t feel good about it, and I just hope no one notices how half-baked it is. (Hello, IRS!)

Endings are hard. Hemingway famously wrote 47 endings to A Farewell to Arms, and when asked the reason for so many different endings, he told interviewer George Plimpton, “Getting the words right.”  Getting the words right means fulfilling the promise set at the beginning of the story and leaving the reader satisfied. We want the pace and tone in the conclusion to complement the rest of the story. This is probably one of the most difficult aspects of writing a novel, yet one that is discussed the least.

There are six main ways to conclude your story. Let’s look at each option so that whether you’re a pantser or a plotter, you’ll feel good about writing The End. 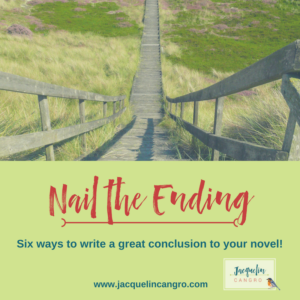 This type of ending is perfect when you want all plot points and story questions to be settled. Readers will know what happens to all of the characters and have a small sense of what’s next for them, e.g. living happily ever after. Some genres lend themselves to this kind of ending. Mysteries, suspense thrillers, romance, and children’s lit come to mind right away. Imagine coming to the end of Murder on the Orient Express and not learning who the culprits are and how they did it.

Hint: The characters don’t necessarily need to be happy about how things turned out!

This option is most often used to set up a sequel. Think of the Harry Potter series or the Star Wars saga. Major, overarching plot points remain open and characters are still on their journeys, even as the book comes to a close. The ending usually reminds readers about the conflict that still looms large to entice them to pick up the next book in the series. In other words, the ending creates a sense of anticipation rather than resolution.

Hint: Readers still want to feel satisfied at the ending while being excited about what happens next.

Maybe you don’t want your novel to have a tied-up-with-a-bow ending. You’d rather not state explicitly what happens, preferring to let readers come to their own conclusions about certain plot points or how the characters ultimately fare. One example that comes to mind is Life of Pi by Yann Martel. With this ending, you’ll need to set up the story arc so that there is more than one feasible explanation to the main plot question. Then, and here’s the tricky part, you must back off from providing the answer.

Hint: This is a delicate balance. Don’t leave readers feeling cheated or confused.

This ending catches readers off guard with an unexpected turn of events. Usually the characters (and the readers) learn that something they believed to be true is false: A character isn’t dead, the hero is the villain (or vice versa), or vital information is uncovered. Twists are dramatic shifts within the last few pages of a novel, playing with readers’ emotions. Atonement by Ian McEwan and Gone Girl by Gillian Flynn are great examples of novels with twist endings that have readers replaying the novel events and changing their understanding of those events.

Hint: This doesn’t mean the ending is unrealistic or cliche. It still needs to make sense based on the characters’ personalities and the framework of the story.

This type of ending can occur one of two ways. First, when using a retrospective narrator who is telling readers the story from a point in the future, the last scene brings readers back to the start of the story in a full circle. Think about the movie Titanic. Elderly Rose starts and ends her story on the modern ship. The middle of the story about her experience on the Titanic is one long flashback.) Or, the last scene can simply take place in the same setting echoing the first scene. The mirror ending creates framework of balance and symmetry for the story, allowing readers to better understand the emotional journey the character has made.

Hint: Take care to make sure the suspense isn’t deflated from the bulk of the story by hints at the outcome.

More than the other endings, this one looks into the future, explaining what happens to the characters months or years later. The “where are they now” ending is most commonly handled through an epilogue. For example, Harry Potter and the Deathly Hallows concludes the series with an epilogue set 19 years after the main story. Readers may want to know what happens to the main characters and how their lives turn out after the story ends, but it may leave them disappointed if the epilogue is rushed and lacks emotional magnitude.

Hint: Don’t use this ending to resolve the narrative arc, only to project into the future.