Author Interview: Bethany Ball, What to Do About the Solomons

When I finished reading What to Do About the Solomons by Bethany Ball, I exhaled. I needed a moment. I realized I’d kind of been holding my breath for the better part of the novel. Not because there are any high-speed car chase scenes but because this family saga pulls no punches. It’s breathtaking in its honest portrayal of the characters and their relationship to each other. Yet it does so with humor and some tenderness.

I reached out to Bethany and she kindly agreed to answer a few questions about her debut novel and the development of the story. What a thrill to have her here today! 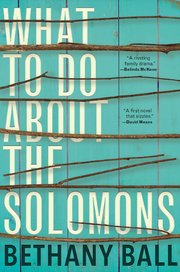 Meet Marc Solomon, an Israeli ex-Navy commando now living in L.A., who is falsely accused of money laundering through his asset management firm. As the Solomons’ Santa Monica home is raided, Marc’s American wife, Carolyn—concealing her own dark past—makes hopeless attempts to hold their family of five together. But news of the scandal makes its way from America to the rest of the Solomon clan on the kibbutz in the Jordan River Valley. There we encounter various members of the family and the community—from Marc’s self-absorbed movie actress sister, Shira, and her forgotten son Joseph; to his rich and powerful construction magnate father, Yakov; to his former star-crossed love, Maya; and his brother-in-law Guy Gever, a local ranger turned “artist.” As the secrets and rumors of the kibbutz are revealed through various memories and tales, we witness the things that keep the Solomons together, and those that tear them apart.

What to Do About the Solomons is available through Amazon, B&N, Indiebound, or your favorite bookstore near you!

JC: I’m always interested in learning about the genesis of a story. How did this idea come to you? Did it grow from a particular scene or character?

BB:  I’d written a thesis of short stories for my MFA, and some of them dealt with these characters or what would later become characters in the Solomons. The story that really pulled it all together was the first chapter, which was the last story that I wrote. That was when I realized that if I put the stories together and then wrote in all the connective tissue, I’d have a novel.

I love short stories, but sometimes you love a story so much, become invested in the characters, and it ends. Sometimes it feels like a premature death. I wanted Guy Gever and Maya to continue, and I wanted to know what happened to Shira and Joseph. The chapter “At Night You Dive” was one of the first short stories I’d written and it went through several versions. Marc was so clearly Shira’s brother. Carolyn, who I’d written about in a short story about a woman who had a crush on her boss and was having a tough time with her visiting father, was clearly Marc’s American wife.

The reason I think this worked so well for me is because, like family, it happened organically and accidentally. A group of people with very different styles, ways of being, ethics, and values are shoved together and forced to understand and live with one another, and even support and love one another.

JC: The details about the kibbutz are so vivid. It almost feels like another character in the story. Did you draw on any personal experiences or research to bring the kibbutz to life?

BB: I lived on a kibbutz for half a year when my son was small. For young children, the kibbutz is idyllic. Lots of space and freedom and tons of kids running around. Most of the kibbutzes had been privatized by the time I came along, so it had changed considerably. I did ulpan (Hebrew language school) while living there and learned a lot, although I was never quite proficient. My son was two years old and because he was in the kibbutz preschool, his first spoken language was Hebrew. I had to catch up quickly! My Hebrew is very good in that I can communicate fluently with anyone under the age of three. I loved the kibbutz. It was not the utopia that some psychology and sociology textbooks claimed, but it fascinated me.

JC: All of the Solomons and their extended family make for a lot of characters for a reader to get to know, but I never felt confused because each character is so well drawn and unique.

BB: There was one comment about the book that was universal: love it or not, there were a lot of characters. I did that purposefully because I grew up in a super small family. There were only three of us with no cousins or uncles and aunts nearby. But in Israel, there were lots of extended family, and the kibbutz is kind of a big family—there are only about two degrees of separation. Everyone knows everyone. My experience of being around Israelis is that there are a lot of names flying around all the time, a lot of extended family and friends. Someone once told me he’d never met a boring Israeli, and I guess I believe that to a certain extent. An Israeli can be doing marketing for a big company in NYC one year and selling a bunch of lawn ornaments from a cart in a mall in San Diego the next. There is a lot of movement, reinvention, and entrepreneurship in the culture.

JC: Who is your favorite Solomon and why?

BB: My favorite Solomon was probably Vivienne. I really loved her defiance and her wisdom and her vanity. She loves her family, but she feels helpless. I also related to her feelings of being an outsider in the kibbutz. I never go into how she might have felt putting her kids in the children’s house at such a young age, but I imagine it wasn’t easy. She’s modern and strong, and yet she’s a product of her age and upbringing. She suffers, and at the same time, she has a wisdom and detachment about suffering.

JC: While reading there were times I laughed out loud. The humor throughout the story is subtle and sometimes sharp or dark, but never at a character’s expense. Was this your intention from the outset? Do you have any suggestions for other writers who want to inject humor into their stories or essays?

BB: I try to love my characters. I’m always extremely aware that I am revealing things about the characters that they know about themselves and also things they are not aware of but that everyone else knows. A friend who has read my work for twenty years now said that he felt all the characters were in some ways aspects of me. I guess that might be true. You take the good, the bad, and the ugly about yourself and you flesh it out, defend and heighten those characteristics in yourself. It’s liberating, and it’s often the parts that readers connect with the most.

As for humor, Dani Shapiro once said in a workshop I took, “Don’t take pot shots at your characters.” That’s why I was pleased by your question. If I wasn’t creating humor at a character’s expense then I’m not taking pot shots. In some ways, I’m making fun of myself, or aspects of myself. I’m loving my characters, and perhaps by extension, I’m loving myself and everyone around me. I sometimes get annoyed if there is absolutely no humor in a film or book. What is more human than humor besides awareness of our death? I think the two probably go together somehow.

Bethany Ball was born in Detroit and has lived in Santa Fe, New Jersey, Miami, and Israel. She now lives in New York with her family. Her current book, What to Do About the Solomons (Grove Atlantic), was released April 4, 2017.

1. My most popular creative writing class, Back to Basics: Exploring the Elements of Creative Writing, will be back this fall through The Loft Literary Center. Each week we’ll do a deep dive into one aspect of creative writing such as characterization, plot, dialogue, etc. The class is online and begins September 20 (8 weeks). Only 15 students are accepted per term. Registration is open.

2. Thank you for making your way over to this location from my old WP.com blog. I love the new look and feel. This move will give me the flexibility to offer some courses right here. In fact, in October I’m planning to launch a short masterclass on writing effective setting and description. Sign up for my newsletter below to get the details first. Are there any courses you’d like to see in the future? Let me know in comments!