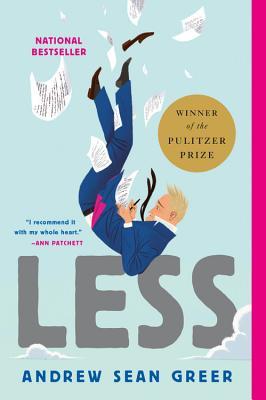 The moment I finished this book I wanted to start again from page one. Less, by Andrew Sean Greer, is the kind of story you could find something new in each reading, so nuanced are the narrator’s observations.

Poor Arthur Less. Things are just falling apart. He is about to turn 50. (The narrator tells us that Arthur is “the first homosexual ever to grow old. That is, at least, how he feels at times like these.”) He is a semi-successful, mid-list author whose latest manuscript has been rejected by his publisher. And his boyfriend is now getting married to someone else. When the invitation arrives, Arthur can’t say yes (awkward!) and he can’t say no (humiliation!) so our protagonist decides to accepts a series of invitations to sub-par literary events that most self-respecting authors would decline. There begins his around-the-world tour of simultaneous avoidance and reflection.

As Arthur travels, his mishaps pile one on top of the other like precarious stones so that by the time he reaches Kyoto, the final stop on his trip, he is really laid bare. All the while, Arthur’s observations are entertaining, witty, delightful, and revelatory, but they don’t cross the line to mockery and sarcasm, which get old and show a lack of imagination.

That brings me to another salient point about this wonderful story. It never turns on itself. It doesn’t devolve into self-pity or mock the characters. It is hopeful and warm. We are rooting for Arthur!

I love books like this — a story that is emotionally complex, characters that are layered, and a voice that is keen and distinct. What’s more: I laughed out loud, many times.

As Arthur’s Italian driver, Arturo (pun intended), takes him through the Italian Alps to his hotel: “’There follows, I am sad to say, a very long ride on a very slow road…to your final place of rest.’
He sighs, for he has spoken the truth for all men.”

I listened to the audiobook, read by the very talented Robert Petkoff, but now I want to read the book so I can linger over the subtle wordplay and sharp wit.

Less is a wonderful, charming novel, and Arthur Less is a protagonist worthy of admiration. You will see yourself in him many times over.