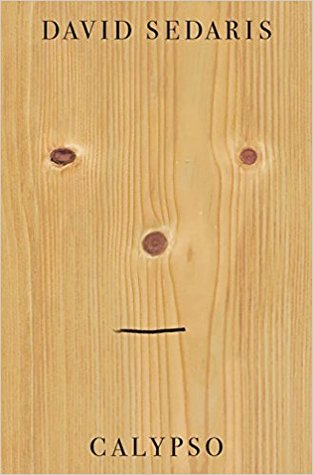 I am a David Sedaris completist. I can’t think of a book he’s written that I haven’t read. So when I say that Calypso is one of my favorites, it says a lot!

This collection of essays, twenty-one in all, is as delightful as it is earnest, as whimsical as it is meaningful. There is the fair share of Sedaris silliness, a scene in which he and his sisters go shopping in a Tokyo clothing store comes to mind, but here is a more introspective Sedaris. Mortality, his own and his family’s, seem to be at the forefront of his mind, and he shares moments of regret and longing. One that particularly touched me centered on his mother, who passed away in 1991. He is saddened that she did not live long enough to witness his success and he is repentant that the entire family swept her alcoholism under the rug. “Sobriety would not have stopped the cancer that was quietly growing inside her, but it would have allowed her to hold her head up.”

Why do I enjoy his writing so much? He is able to synthesize important events in his life (his sister’s suicide, his father’s aging) and juxtapose them with small mundane moments (picking up trash along the side of the road, racking up steps on his Fitbit), which highlights the absurdity of both.

One of my favorite paragraphs highlights this absurdity perfectly: “Honestly, though, does choice even come into it? Is it my fault that the good times fade to nothing while the bad ones burn forever bright? Memory aside, the negative just makes for a better story: the plane was delayed, an infection set in, outlaws arrived and reduced the schoolhouse to ashes. Happiness is harder to put into words. It’s also harder to source, much more mysterious than anger or sorrow, which come to me promptly, whenever I summon them, and remain long after I’ve begged them to leave.”